The SEMA Show is renowned for its automotive eye candy for enthusiasts, and GT Radial was right in the thick of things at the 2014 show with fitments on four featured project vehicles, as well as GT Radial Formula Drift driver Kyle Mohan’s race car. 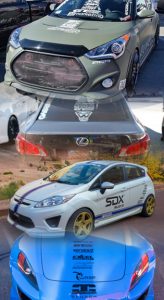 Mohan’s Mazda RX-8, featured in the Exedy USA booth in the main hall, was shod with our Champiro SX2 tires on bright chrome street wheels; a very different look from his usual track set-up that really showcased our tires.

• Our Champiro 328 tires were featured on a 2014 Hyundai Veloster Turbo owned by Solky Sim of 742 Marketing. The car features an ARK Performance Aero Kit and suspension setup, sitting on 18” XXR Wheels. It definitely stands out with a matte olive green wrap by 3M.

• Also from 742 Marketing was Christian Islas’s 2012 Lexus IS250 on our Champiro HPY tires, which was a feature vehicle with Rotary Lift. This Lexus has huge 19” Concept One Wheels and sits on ACUAIR air suspension. It embodies the popular Japanese style known as VIP look.

• M2 Motoring showcased GT Radial on two cars — the first being David Fotheringham’s 2012 Ford Fiesta ST. This car is sporting our Champiro UHP1 tires on Rotiform Wheels and was a feature vehicle with Sondpex USA.

• M2 Motoring’s second car was on our Champiro UHP1 tires as well. Kenny Lee’s 2002 Honda S2000 is definitely hard to miss. This aggressive Honda had an amazing bright blue custom paint job with a widebody kit, neon green wheels, and a massive wing. It was featured in the Sondpex USA booth.

These project vehicles will continue to generate buzz for the GT Radial brand at consumer events throughout 2015, and the Giti Tire marketing team is already working on exciting project vehicles for this year’s SEMA show.