Howard Glasky was admittedly suspicious when he received the call that he had won a free set of GT Radial tires. After all, he had been deluged recently by telemarketers offering those “free” vacation packages with all the strings attached. 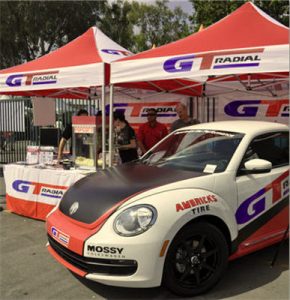 As Glasky soon found out, there were no strings here. The Orange, CA, man had entered into a drawing at the GT Radial booth at Bugstock 2013, an annual outdoor event in Costa Mesa, CA, sponsored by K-EARTH 101 and CBS Radio.

He was the lucky winner! GT Radial representatives met him at his local America’s Tire store in Garden Grove, and he drove away with a brand new set of GT Radial Savero HT2 tires (size P265/70R17) on his wife’s 2003 Ford Expedition.

“I was a little wary at first, but the folks at GT Radial and America’s Tire were great! Absolutely no strings attached,” Glasky noted.

The lucky winner said he was also very pleased with the service he received at Americas’ Tire. “They all came over to shake my hand and got me in and out very quickly,” he recalled. “I’m definitely going back there.”

Owner of a dark blue 2003 Volkswagen Bug in mint condition (only 52,000 miles), Glasky said he thoroughly enjoyed showcasing his car at the Bugstock event, and he is certainly glad he stopped by the GT Radial booth.

“I was really just interested in the free GT Radial T-shirt and never thought I would win the tire drawing,” he said. “I’m glad I took that call!”