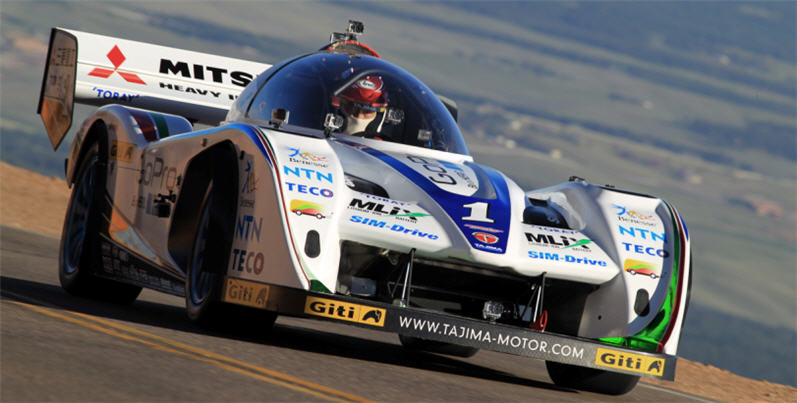 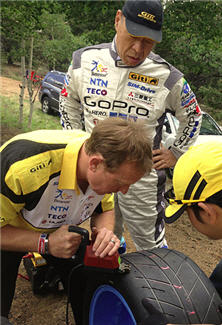 Setting a new electric record at 9:46.530, Tajima surpassed the 9:51.278 he turned in during the 2011 race in a Suzuki SX4 when he became the first driver to crack the Peak’s elusive ten-minute barrier. The eight-time Unlimited Division champion switched to the electric auto division last year at the Pikes Peak International Hill Climb, but his first attempt failed when he had to shut down because of an onboard fire.

But not so today! Tire engineers with the Singapore-based company made the right call just minutes before Tajima’s record run when they hand cut tread grooves into the 20-inch slicks that had been specially designed for Tajima’s vehicle. Their quick action was in response to the road becoming wet from a 30-minute rainfall that let up just as Tajima was getting his electric-powered vehicle in position at the start line. The tires performed at an exceptional level, according to company officials.

Tajima, in conjunction with the Monster Sport Team and Team APEV, selected GITI Tire as the new tire supplier for their 2013 Monster Sport E-Runner Pikes Peak Special – a 1,000 horsepower electric vehicle utilizing ultra-advanced Japanese technology. This was the first motorsports competition of any type for GITI Tire in the U.S.

The Pikes Peak International Hill Climb is the second oldest motor sports race in America. The race is run on a 12.42 mile course with 156 turns that begins at 9,390 feet and finishes at the 14,110 foot summit.

GITI Tire, the world’s ninth largest tire company, utilizes motorsports as a platform for fast track technology developments in material science, process and construction designs. These technologies ultimately find their way into the DNA of the company’s everyday tires for consumers.