GT Radial entered a new world in professional motorsports in 2014 – the Formula Drift Pro Championship, a worldwide phenomenon that enjoyed its biggest and most exciting season yet last year.

Seven rounds of competition across the United States determined the 2014 Formula Drift champion. In each round, drivers must first qualify in single-car runs to determine if they make the top-32 round of competition. Once they qualify (at some events, over 50 drivers attempt to qualify) drivers then face off in tandem competition where a pair of cars are matched together. One leads, then the other, and based on the strength of their runs, the judges select one driver to move on to the next round. 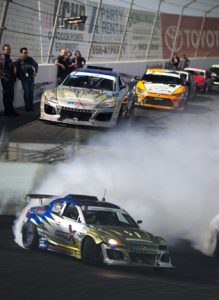 In this hyper-competitive environment of well-financed, sophisticated teams fielded by tire companies with years of experience, GT Radial came to battle with the Champiro HPY and Champiro SX2 tires. For its inaugural year of competition, GT Radial selected Formula Drift veteran Kyle Mohan. Mohan, whose Kyle Mohan Racing team is based in Signal Hill, California, is known for driving a rotary-powered Mazda RX-8 against a growing field of V8-powered vehicles.

Mohan qualified for each round of competition, and three times he advanced to the top 16. At the first round, on the Streets of Long Beach, Mohan put GT Radial in the top 16 despite a large crash in the top 32. The KMR team worked feverishly during the halftime break to have the GT Radial Mazda RX-8 ready for the top-16 competition.

Another strong event in Seattle at Evergreen Speedway saw Mohan advance to the top 16 again. And, at the final round in Irwindale Speedway with a large number of GT Radial staff and guests in attendance, Mohan survived heavy contact in the top 32 to reach the top 16 again.

It was a strong first season for GT Radial that demonstrated the outstanding grip, consistency and durability of the GT Radial HPY and SX2 tires. GT Radial will be back in Formula Drift in 2015 aiming to take down more of the competition.