The “ball and barrel” race at Howiepalooza 2013 was a memorable event this year, especially for David Jones who tied for first place in his Jeep fitted with GT Radial Adventuro M/T tires. 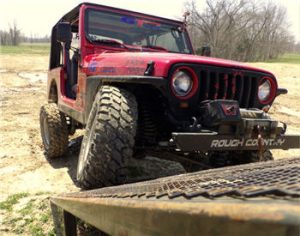 “It was great to get back into action with a new heavy duty crossover steering kit, track bar and a fresh set of Adventuro M/T’s,” said Jones, a small business owner in Springfield, MO, who participates in numerous off-road events each year. “The folks at GT Radial sent me a new version of the M/T which features a steel reinforced sidewall. I was anxious to check it out!”

Jones said the April 25-28 event at the SMORR off-road park in Seymour, MO, started with 28 hours of rain, which meant mud, deep water and an ever changing terrain. “I went out with a mission to hurt these tires,” Jones laughed. “I aired down to around 13 psi (I normally drop to 18 psi), giving me a full spread on the tire tread.”

Jones continued, “Airing down that low is harsh on the sidewalls, but with the new design they felt great! I held no reserve when I encountered all the muddy rocky trails, and surprisingly enough, I left the park with no damage to the sidewall or the lugs.” 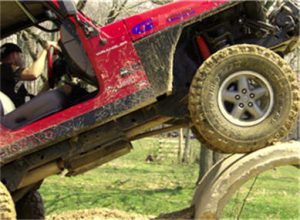 An estimated 250 off-road enthusiasts competed in the event, some of them coming from as far away as Minnesota and many of them driving “extreme” vehicles.

The ball and barrel event involves a driver going as fast as possible while his, or her, passenger throws a ball into a barrel at the turn. Jones completed the sloppy course in 43 seconds, tying him for first place with the park’s owner, who was riding on 47-inch tires.

“I still can’t get over how stable the tires felt; even aired down that low I didn’t feel the sidewall roll. Big high five to the GT Radial engineers – the product just keeps getting better!” Jones said.

For the “mudders” out there like Jones, the Adventuro M/T max traction tire for light trucks and SUVs features the most aggressive tread pattern in the GT Radial family; perfect for conquering rough, harsh, muddy, or snowy terrains.

Available in 15- and 16-inch sizes, the Adventuro M/T features a high void ratio and pyramidal-shaped tread elements for excellent resistance to aquaplaning and self-cleaning capacity. The reinforced casing construction provides excellent overall resistance to damage – as Jones found out recently!